The Rock Block with Shane 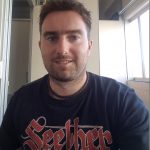 In a world where electro & club music have seemingly taken over, Shane is here to prove that rock isn’t dead! With a lifelong love & appreciation of rock music, The Rock Block is his outlet to showcase music that would largely be ignored elsewhere. A mix of well known/established artists & lesser known acts breaking into the industry is what’s in store each week, along with previews of new albums & occasional interviews with artists from home & abroad.

Be sure to grab your weekly dose of rock on The Rock Block from 5:30pm Saturday.